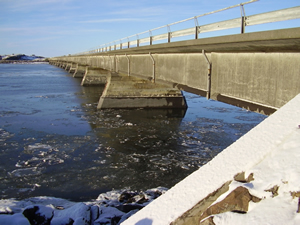 got it“s name from the river Hvķtį, the largest river in province Borgarfjöršur.
River Hvķta runs from glacier Eirķksjökull where it starts it“s journey to the ocean as a merry stream. Brooks and rivers are running into it, and when it meets the ocean at Borgarnes 117 km away from it“s source it has become a huge river.
There are six bridges on river Hvķtį. In a typical daytrip around province Borgarfjöršur, we cross all the bridges, that's where the name HVĶTĮ travel comes from. 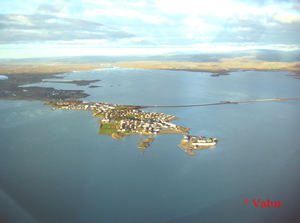 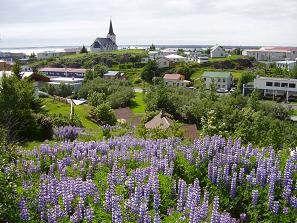 , the homestead of HVĶTĮ travel is a town with nearly 2000 inhabitants, and is the center of the province. The town is founded 1867, but the area was first settled in the year 891. The main industries of the town is commercial and industry. The town has got good supermarkets, shops, restaurants, museums, two hotels, youth hostels, and a sport center with swimming pools and hot tubs. Nearby the town you can go golfing, rent a horse or go hiking or fishing. The estuaries of Hvķtį are near Borgarnes.
Borgarnes is the scene of Egils saga.